After Yuri was send back home, a new problem occurred for Team-NL related to Epke Zonderland. The day before the final, the Olympic Comittee disqualified him from the Olympic Games. Why?
They asked him: ‘Who are you?’. Epke answered: ‘I’m Epke Zonderland’. ‘Do you have a flag? they asked further. He answered:’No’. The conclusion was that Epke didn’t belong to a sport-manifestation of nations.

However Epke was saved by the bell by Boris Johnson, who shouted: ‘Wait wait, Epke is an ancestor of the English king ‘Jan Zonder Land’ and so he’s part of the Royal Family. You know, I’m a kind of Ivanhoe and so Epke should represent England. He will certainly win another Gold Medal for England. Afterwards the Queen will invite him to show his Gold Medal to her and make him a Member of the British Empire.’

I feel sorry for the Netherlands, because they lost another hero after Yuri and maybe Daphne Schippers. Furthermore Epke will carry the English flag during the final ceremony. By the way, do you know that Yuri van Gelder became a big popstar, because he will perform at the Dutch musical festival Lowlands. Afterwards he will have a drink with the youngsters at the festival. 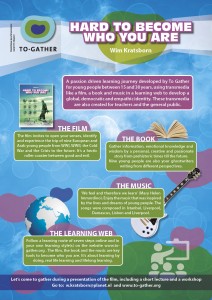 As a metaphor I use the To-Gatherland Festival 2022, where 9 youngsters experience the future in 5